The seventh stone John mentioned in the foundation of the New Jerusalem (Rev. 21:18-21) is Chrysolite. P 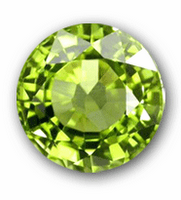 eople in the Middle Ages wore Chrysolite, also known as Peridot, to gain foresight and divine inspiration. Pirates favored it to protect them against evil. This beautiful stone was worn or carried for general healing purposes: to increase strength & physical vitality, protect against nervousness and aid in healing hurt feelings. It was thought to protect lungs, sinuses, and wrists from illness and injury and help liver & adrenal function. The green hue suggested a connection to attracting wealth. By wearing it to bed, it was thought to promote sleep and help dreams become a reality by attracting love, calming raging anger, and dispelling negative emotions. It symbolizes Thankfulness and Praise. 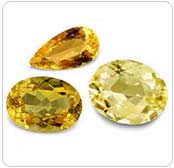 The eighth, Beryl, is one of the more ambiguous jewels mentioned in Scripture. In its pure form, it is colorless, but many different impurities give beryl various color possibilities. Emeralds are the green variety and aquamarines are the blue variety of beryl. There are other colors as well: greenish-yellow, pink, red and golden. Like the emerald, beryl was believed to develop virtues in a wearer, those of a good nature and noble mind. It was also thought to being victory in battle. It symbolizes Wisdom and Humility. 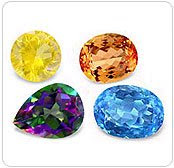 Topaz, the ninth foundation stone, comes in a variety of colors and is surprisingly one of the gems whose history in Scripture is most unknown. In ancient times, a figure of a falcon carved on a Topaz was thought to help earn the goodwill of kings, princes and magnates. The Greeks thought it brought strength, and during medieval days it was thought to heal physical and mental disorders as well as prevent death. Medically, it was thought to stimulate the endocrine system, assist in general tissue regeneration, treat hemorrhages, increase poor appetite, and help fight blood disorders. Emotionally, topaz was believed to balance emotions, calm passions, release tension and give feelings of joy and rejuvenation. It symbolizes Light. 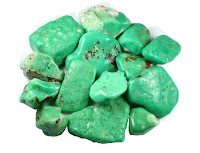 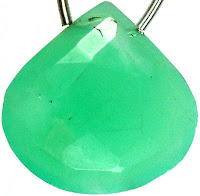 Of all the stones, Chrysoprasus is probably the most disputed. We’re uncertain if it is a golden clear stone, green hazy stone, or our everyday turquoise! Little is known about the first two options, but if the chrysoprasus is the same as turquoise, it was believed to defend or protect wearers from disease and illness by changing color with the wearer's health and protect him or her from injurious forces. It symbolizes Repentance and Forgiveness. 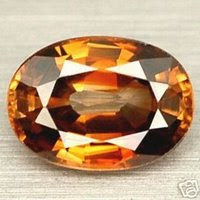 Jacinth is a zircon, of which there are many color variations. The orange variety of zircon is the jacinth. It was believed to relieve pain and whet one's appetite. By preventing nightmares, it ensured a deep tranquil sleep and supposedly helped on be at peace with oneself by improving self-esteem. Zircons like Jacinth were believed to provide wearers with wisdom, honor and riches, and if its luster were to be lost, it was a warning of impending danger. It symbolizes Honor.

Last installment to follow.
Posted by Julie at 8:47 AM