The third stone John mentioned in the foundation of the New Jerusalem to come is Chalcedony. The Romans prized chalcedony as seals, and the Victorians carved them into cameos. Chalcedony was used in Renaissance magic for health and safety. This beautiful stone was believed to banish fear, hysteria, depression, mental illness and sadness. Wearing chalcedony was believed to be excellent for eyes and thought to reduce fever. While some thought it stimulated creativity, others wore it to promote calm and peace. It's symbolic meaning is Protection and Security.

t convulsions in children. Emeralds were also used as antidotes for poisons and when held in the mouth, were believed to be a cure for dysentery. They were believed to aid with ailments of the spine, mental illness, memory loss, intelligence, and neurological disorders. Somehow, it was supposed to assist women at childbirth, too. Many virtues were ascribed to emeralds. It was thought to drive away evil spirits, give faith, success in love, and preserve the chastity of the wearer. Supposedly, to aid a wearer in wisdom, it changed color in the presence of false friends or false witnesses, thus promoting peace of mind, true friendship, and felicity in domestic life. It symbolizes Faith and Peace. 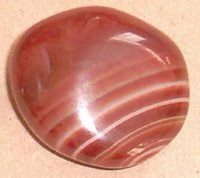 The fifth stone, Sardonyx, is a layered stone of red and white, prized by Romans for use in making cameos of heroes such as Hercules or Mars and worn by soldiers. They believed the stone would make the wearer brave and daring. During the Renaissance, sardonyx was believed to bring eloquence upon the wearer and was regarded with great value by public speakers and orators. Medically, it was used as a heart, kidney, nerve, capillary, hair, eye and nail strengthener. It was believed to help one sleep and eliminate apathy, negative thinking, stress and neurological disorders. Some believed it helped one change habits, sharpened the wits of the wearer and brought spiritual inspiration while helping to emotions and passions under control. It is symbolic of Self-control and Holiness.

Sardius, or Carnelian, is the sixth stone John mentions. Because hot wax does not stick to this stone, it was used widely during Roman times to make signet or seal rings for imprinting a seal with wax on correspondence or other important documents. It was believed to protect wearers from weapons and evil spirits, since true love could not be present in conflict or evil. I'm not sure why, but it symbolizes love.

Come back again later for the next stones!
Posted by Julie at 8:26 AM