Finally, Amethyst. The story of the origin of amethyst comes from Greek legends: The god of wine, Bacchus, was insulted one day by a mere mortal. He swore the next mortal who crossed his path would be attacked by fierce tigers. A beautiful maiden named Amethyst drew near, so the Goddess Diana turned her into a beautiful statue of quartz to save her from the tiger’s claws. Remorseful Bacchus wept tears of wine over the stone maiden, creating a lively purple stone. As a result, amethyst stones were believed to protect the wearer from drunkenness, or drinking wine from an amethyst goblet would prevent one from becoming inebriated! 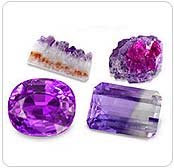 Amethyst was believed to magnify psychic abilities and right-brain activity. Medically, it was thought to strengthen immunity, energize and purify the blood, relieve headaches, and improve blood sugar imbalance. In the Middle Ages, amethyst was thought to encourage celibacy, so the churches used them in ornamentation. In fact, Catholic bishops still often wear amethyst rings. Oddly enough, Amethyst was also associated with a number of superstitions, being regarded as a love charm, and as a protection against thieves. Additionally, it was placed under the pillow at night to produce a calm and peaceful sleep. It symbolizes Nobility and Sobriety.

What intrigues me most about these gems is God uses them as foundation stones! Precious as they are to us, we’d never use them to build a house upon, yet his supply is so great, he can stick them under and on top of the ground and inlay the walls with them, surrounding himself with the finest of his own valuable creation! And this foundation will last for all eternity. Furthermore, consider the virtues upon which his city is built: Justice, Truth, Protection and Security, Faith and Peace, Self Control and Holiness, Love, Thankfulness and Praise, Wisdom and Humility, Light, Repentance and Forgiveness, Honor, Nobility and Sobriety. Now, that’s the kind of city I want to live in!

Bear in mind, the city of New Jerusalem itself is brilliant gold with a street of pure gold, too. All this to say, God is worthy of our best and most valuable. He endorses extravagant worship of Himself in ways that honor and glorify him. He isn’t waiting for us to sell our homes, to buy and then donate gems to the expansion of his kingdom, but he wants to remind us that nothing is too good to be used for him and his work. We cannot withhold our best for ourselves, or even others. He alone is worthy of the most valuable possessions we have: our lives, our time, and all that matters to us. Our experiences as followers of Christ cannot be valued or measured. They are like the precious stones in the jewelry boxes of our lives. God wants to use those treasured nuggets of our lives to build foundations for the future of his kingdom through our family and discipling the younger generation. Are we withholding any treasures from him? Something he wants to build a foundation upon for his own honor and glory that will last for all eternity? When we say, “I’m not telling about the difficulties in my marriage,” or “I can’t share about my prodigal child,” or “I don’t want anyone to know my family member who decided she’s gay,” we are withholding a precious stones from God; He wants and deserves them all. Around Valentine’s Day, we give gifts to those we love. What precious stones in our lives will we give our First Love today?
Posted by Julie at 8:55 AM