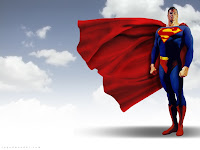 I wonder if Jesus ever felt like a superhero. Having never been a superhero myself, I don't have an actual frame of reference for that experience, but in all the movies, shows and comic books I've seen (which isn't a lot), there's an element of loneliness. Although people appreciate their work against the forces of evil, the mystery of their power and illusiveness of their identity frightens away most people (Lois Lane being an exception, of course).

The reason I ponder this thought is due to a passage I read this morning: Luke 9:18-27. Jesus was alone, talking with the Father. What in the world were they talking about, I wonder? Could it be that Jesus was expressing his feelings over this "superhero" problem? (He'd just fed over 5000 people with 5 loaves of bread and 2 fish.) Perhaps he was struggling with the conflict between his true identity (God Incarnate) and who people thought he was (Miracle Working Rabbi-Priest Who Works On Demand). Because the next question to his most trusted friends and followers was "Who do people say I am?" Then, he asks, "Who do you say I am?"

I don't for one minute think he was seeking validation from these people he loved (God can't have an identity crisis). But I do believe he longed to hear from their lips the confession of what others and they themselves thought about him. Because although Jesus is God incarnate, he is also fully human, and, I believe, struggled with the same problems of loneliness and security in relationships. When we're feeling alone or misunderstood, we frequently go to those who know us best and love us most for their thoughts about who we are. I think Jesus was doing the same thing. He'd just finished something amazing that rocketed him to celebrity status, but he was finding it "lonely at the top." So, as we should, he went first to his Father to talk about it and then called upon the thoughts of those he trusted, knowing that (by walking with him) they were people who were in good relationship with God.

When Peter correctly answered that he knew Jesus to be the "Messiah sent from God," Jesus knew that his close friend understood the truth of who he was, even if he didn't understand all he did or even the implications of the confession. Jesus tried to explain to Peter and the other disciples what would happen to him in the days to come, if only as a warning. True friends want the best for one another; surely the disciples, when they heard these terrible prophecies lived in denial of their reality.

But then Jesus offers another heart-stopper: we, too, can be superheroes. We can sacrifice ourselves and everything we know and hold dear, to follow him. It may be a long and lonely road where we encounter people who misunderstand us and have unrealistic expectations for who we are and what we can do, but if by the testimony of our words and/or example someone comes to know him as Savior and Lord, we've not only saved a life like Superman, we've saved an eternity. Superheroes act in the best interest of others, even if it exposes them to kryptonite. But by giving up our lives for Jesus' sake, we find that we have saved ourselves. So, in spite of the loneliness or misunderstanding that may come with it, Lord, make me a superhero this week for someone who needs you to work through me. (But please don't make me wear a cape.)
Posted by Julie at 7:29 AM No comments: