God Must Be Laughing 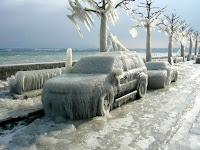 It's cold here in East Texas. And not just "Cold For East Texas" Cold. We're talking "Temperatures Expected To Dip Into The Teens, And Windchills In Single Digits" Cold.

Monday afternoon I spent several hours in the pasture behind the house collecting sticks and small branches to use for kindling fires in the fireplace. I can't seem to find enough clothing to keep warm. (Typing with gloves may create misspellings - my apologies!) And I should probably take everything out of the extra refrigerator in the garage, because it's colder in the garage than in the refrigerator in the garage. (Did that make sense?) Meanwhile, Western New York is facing its coldest winter in 20 years and the UK is facing its coldest winter in 30 years!

But for decades now, we've heard humanity is destroying the earth through a process called "Global Warming" (more recently altered to "Climate Change" in light of the arctic temperatures). Mankind, we've been told, through aerosols, soot, pollutants, carbon footprints, greenhouse gasses, and population growth has been systematically destroying the Universe as we know it. While I certainly and thoroughly endorse responsible stewardship of creation through recycling and conservation, I think many individuals and governments have placed Creation as an idol of worship in place of her Creator. How supercilious we are to believe we can throw completely out of whack all God Omnipotent put into motion!

God has made the truth about himself obvious. For ever since the world was created, people have seen the earth and sky. Through everything God made, they can clearly see his invisible qualities—his eternal power and divine nature. So they have no excuse for not knowing God. But though they knew God, they wouldn’t worship him as God or even give him thanks. And they began to think up foolish ideas of what God was like. As a result, their minds became dark and confused. Claiming to be wise, they instead became utter fools. And instead of worshiping the glorious, ever-living God, they traded the truth about God for a lie. So they worshiped and served the things God created instead of the Creator himself, who is worthy of eternal praise! Since they thought it foolish to acknowledge God, he abandoned them to their foolish thinking and let them do things that should never be done.

"Who is this that questions my wisdom with such ignorant words? Brace yourself like a man, because I have some questions for you, and you must answer them. Where were you when I laid the foundations of the earth? Tell me, if you know so much. Who determined its dimensions and stretched out the surveying line? What supports its foundations, and who laid its cornerstone? Where does light come from, and where does darkness go? But of course you know all this! For you were born before it was all created, and you are so very experienced! Have you visited the storehouses of the snow or seen the storehouses of hail? (I have reserved them as weapons for the time of trouble, for the day of battle and war.) Where is the path to the source of light? Where is the home of the east wind?"

Unanswerable questions for his arrogant creation. I suspicion he blew a little extra breath of cold this winter, just to remind us Who's in charge. Sitting on his throne in heaven, warmed by the roaring fire of his glory, God must be shaking his head and laughing.