Ok, so the chances are one in a googlezillion, but it doesn't hurt to try! Yes, I'm speaking of the

HGTV Dream Home (pictured below). For about three years now, I've been trying to win the home offered by the station annually, but since you've never seen me on TV, you may have figured out by now that I've lost every time.

I still haven't figured out why I didn't win the one on Lake Tyler in 2005. I mean, the Lord knew we were going to move to 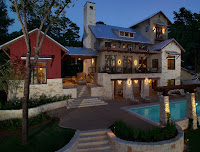 Frankston. The church could have used our parsonage for another staff member, in addition to the youth minister parsonage. See, I'm totally thinking about the expansion of the Kingdom and God's work at FBC. (Ok, maybe not totally, but think how cool fellowships would have been out there.) Here's a pic on the left in case you've forgotten.

Honestly, though, when I watched the tour of the 2008 house, I wasn't

so impressed. It only has a one-car garage and the bedrooms are fairly small for the most part. Plus, it may be right on a private beach, but the neighbors' homes that are not yet there will be about 50 feet from either side of the house as it stands now. What if they're obnoxious and noisy? And I'm still not sure about the color of the guest room walls. Uh. Umm.

If pigs did begin flying and we should happen to win, we'd sell it immediately, but keep as much of the furniture we could store.

Don't worry, though. I'm not holding my breath.
Posted by Julie at 3:31 PM