I'm really excited about Easter this year. I don't know why this year more than others, but something deep within my spirit yearns for the Resurrection in a way I've never sensed before. It's still more than a month away, and although I'm observing Lent, it's not self-denial that's crying out; I honestly don't know what it is. So, I've decided to take a spiritual journey through several aspects of Christianity and Biblical study to see if I can grasp hold of whatever is within me, toward a greater understanding and passion for Christ.

My love for History is a natural beginning point for me. I've always been drawn to etymological studies and histories of symbols, so I thought I'd investigate some Christian symbols. These aren't comprehensive studies, but enough to satiate my curiosity.

The Fish: One of the most important symbols to early Christians, the fish, with its unblinking eyes reminded Believers of God's ever-watchful guard over them. Jesus told Peter he (and thereby, we) would be "fishers of men." Additionally, it serves as a reminder of Jesus' miracle of the loaves and fishes. He is ever-faithful to provide for those who trust in him.

Ichthus/Icthus: No, this is not my tattoo! But it's not a bad one to have. Closely related to the fish symbol above, you often see them combined. That's because these are the Greek letters which spell the word "fish," pronounced Ichthus. Early Christians used the letters of "Ichthus" to form an acrostic of their confession of faith. І-Jesus, Χ-Christ, Θ-God, Υ-Son, Σ-Savior. 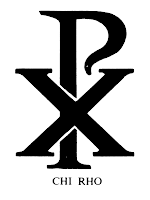 Chi Rho: This is one of my favorites because its history is so rich with excitement! Chi and Rho are the first two letters (ΧΡ) of "Christ" in Greek ΧΡΙΣΤΟΣ (Christos). The story goes that in 312 AD, Constantine was about to lead his army into battle with his enemy Maxentius near Rome, with the winner becoming emperor of the whole empire. Originally a pagan, Constantine was worried about the coming battle, so he prayed to the "Supreme God" for help. That night in a dream he said he saw Jesus telling him to "conquer by this," using the chi-rho sign "as a safeguard in all battles." Constantine ordered it to be put on his soldier's shields -- and won the battle.

The Anchor: Because of the dangers of being a Christian, early Believers would disguise the symbols of their faith, even on graves. (If you were seen visiting a Christian's tomb, you may presumably be a Christian as well.) The anchor was already seen by the culture of that day as a symbol of hope, stability and security, so when Christians used it, they deepened its message by affirming hope is found in Christ alone. Notice the vertical and horizontal lines create a cross! Now, we too "have this hope as an anchor for the soul, firm and secure (Hebrews 6:17)."

Although I looked in other places too, my primary source for this info was from this website. It's the ministry of an evangelical Christian with degrees from Fuller, so I think he's probably trustworthy. Feel free to do your own exploration; I barely scratched the surface!
Posted by Julie at 8:40 AM

This was so interesting, Julie! I'm one of those history and symbol-loving types, too, especially when it comes to our faith. It's also a reason I love James Avery jewelry...the symbolism and meaning.

I also think there's another reason that you and I both like the anchor. =)