If Paul had been a woman, he would never have written this verse, or at least he'd have chosen different wording. I know the context deals with eating food sacrificed to idols, but if he were like many women I know, he'd have understood that just looking at food causes some of us to "gain." Yet, by not eating it, we might "lose" something! Sorry, Paul, I beg to disagree with you on this issue. ;-)

Nevertheless, Darin's final sermon of the FEARLESS series struck an all-too familiar chord with me yesterday. He pointed out how many of us scavenge and horde things in our lives for fear there will not be enough for later. Thus, we make poor decisions based on these fears, once again telling God we doubt his provision and sufficiency for our lives. We sometimes hide or deny this doubt with spiritual concepts and biblical principles such as "stewardship" or "wise living," but in reality, our hearts are not acting in obedience, they're reacting because of greed or a lack of faith.

I think I've done that often in my life, primarily with food. For fear I won't get to enjoy all I want -not need- I'll overeat. As though there will never be another chocolate cake made 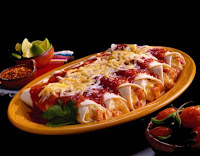 or enchilada baked. (Now I'm getting real personal talking about Mexican food!) In all honesty, part of this stems from a deep ethic against wastefulness. I despise throwing away good food, knowing the desperation with which some people live for a daily scrap of bread, and the influence and stories of my Depression-Era grandparents has truthfully informed me there may not always be enough.

And yet, I'm the first to purge our home of clutter and excess junk, a.k.a. Moderation. So, why do I struggle to apply the principle of moderation to my eating? In truth, I'm more willing to gorge our landfills with plastics and papers than bio-degradable foods! But (and this is a tough one for Baptists), gluttony is just as significant a sin in the eyes of Holy God as any other. In fact, when He provided quail for the Children of Israel in the wilderness, those who gorged themselves were struck with a severe plague and died. So much that the place became known as Kibroth-hattaavah, which means “graves of gluttony." (Check out the crazy story in Num 11:31-35!)

My God will supply all my needs according to his (unlimited) riches, 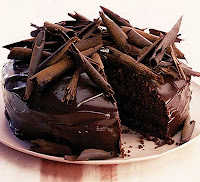 and sometimes he'll even even throw in a chocolate cake. I just need to remember not to eat it all in one sitting, because, like the old Doritos ad campaign: "He'll make more!"
Posted by Julie at 10:14 AM

Your wait is over...I've posted thoughts on session 3...I've started drafted my session 4 thoughts...but also have another write-up I want to do...is it bad to go from a 4 week hiatus to 3 blogs in 2 days? haha!